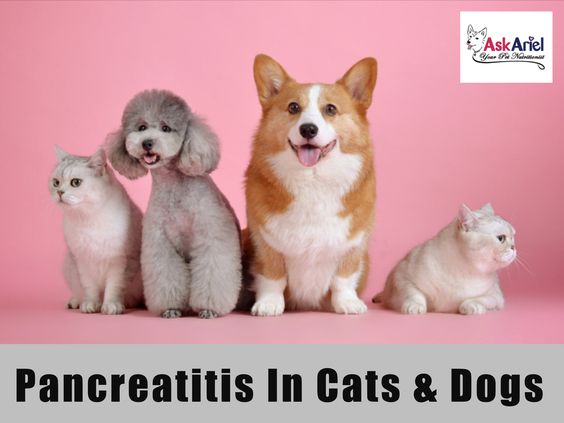 Does your Dog or Cat have a Painful Abdomen? Speak to Your Veterinarian About the Possibility of Pancreatitis

Pancreatitis is an inflammation of the pancreas, a vital gland found in the abdomen, near the stomach, liver, and intestines. When a dog or a cat is suffering from pancreatitis an owner may notice a loss of appetite, pain after eating, vomiting and diarrhea.  Dogs often stand in a “prayer position”, stretching their body out to decrease pressure on the abdomen in an attempt to relieve the pain, and they may have a yellow tint to the gums, whites of the eyes, or skin, which is called jaundice. Cats with pancreatitis show a more subtle set of symptoms, such as a decreased appetite, vomiting, weight loss and hiding behavior. Jaundice can also occur in cats.

Pancreatitis can be extremely dangerous, even terminal, so it is critical to seek out care when you notice potential signs. Inflammation of the pancreas can have severe consequences, even life threatening, both short term and long term. This is because the pancreas makes insulin which controls blood sugar levels, and makes enzymes that help your animal digest food properly so that nutrients can be absorbed

There are two main types of pancreatitis:

Cats have slightly different anatomy than dogs and commonly have pancreatitis associated with liver/gall bladder infections and/or inflammatory bowel disease, sometimes referred to as “triaditis.”

In addition to asking for the owner’s observations of signs, a veterinarian will likely require the following tests toward a diagnosis:

A combination of the above tests may be required to determine a diagnosis of pancreatitis or another disease that can cause similar clinical signs but may require different treatment. The objective of treatment is to keep the dog or cat hydrated while treating nausea, vomiting, and pain. The veterinarian will also discuss prevention of another bout of pancreatitis, which may include lifelong changes including diet, supplements or medications.

What to Expect After Treatment